His Holiness Pope Francis appointed the Most Rev. Shelton J. Fabre as the fifth archbishop of the Archdiocese of Louisville in 2022. With his appointment, Fabre became the city’s first Black archbishop and only the second in the U.S.

Fabre attended St. Joseph Seminary College in his native Louisiana, graduating with a Bachelor of History degree in 1985. After obtaining a Master of Religious studies degree at Katholieke Universiteit te Leuven, a Catholic research university in Belgium, Fabre was ordained a priest for the Diocese of Baton Rouge in 1989. As a priest he served as pastor at numerous Baton Rouge churches, as well as chaplain at the Louisiana State Penitentiary.

He currently serves as chair of the U.S. Conference of Catholic Bishops’ Ad Hoc Committee Against Racism, and led the writing of the U.S. Bishops’ most recent pastoral letter on racism, Open Wide Our Hearts – The Enduring Call to Love, which was approved and published in 2018. He also serves on the board of Catholic Relief Services. 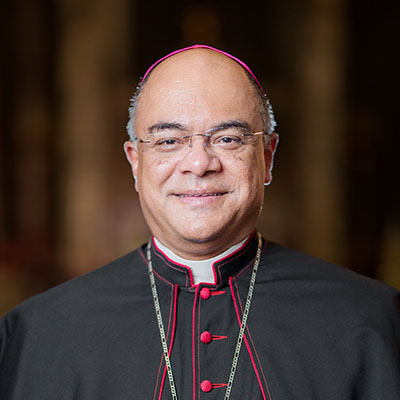